They just took a page out of Linkedin’s playbook and fired a warning shot across their bow.

Wow. I think this is a big deal and signals a quiet new war happening in the online recruiting space. As industry insider, Joel Cheesman recently said to me, ‘they’re on a collision course with Linkedin’. He’s right. From a recruiting perspective these two companies are the hottest players in the market. And each of them is after the same recruitment dollar that employers have to spend. Eventually, Indeed and Linkedin could become the ‘ATS of the future’.

Their new endorsement feature (endorse.indeed.com) appears to be rolling out quietly. I only discovered it after a job seeker tipped me off. There’s no mention on the Indeed blog about it. I happened to see a post from someone on facebook about requesting an endorsement for ‘my indeed’ resume. When I clicked, I was presented with the page below. The endorsement feature uses Facebook as a third party. I’m guessing thats for transparency sake. I didnt actually make the endorsement so I’m not sure what happens next. 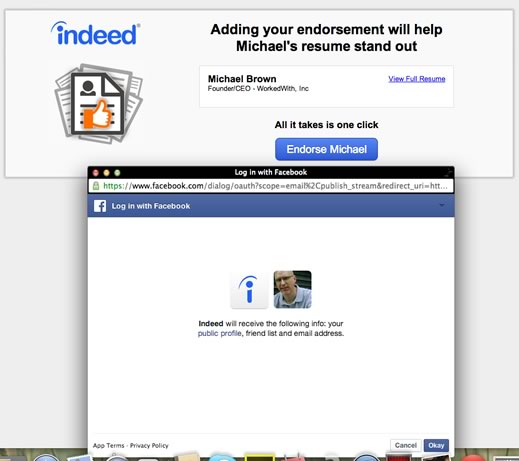 This is a fascinating move by Indeed. Up until now they didnt seem to have any intention of going beyond just a resume listing. But its clear now that they are coming after Linkedin and other players in the applicant tracking space. Could some sort of Indeed social network be next?

It will also be interesting to see how Linkedin reacts to this. Will they buy one of Indeed’s competitors? I have long surmised that SimplyHired would be the perfect partner for them. SH is the second most popular aggregator, they’re both in silicon valley and would make a great ‘upsell’ to existing Linkedin customers. And since Linkedin just sold more stock there is already speculation about them going on a spending spree. Plus the folks at SimplyHired have been sprucing themselves up lately. They made a bunch of new hires, rebranded their look and are trying to regain some ground lost. Linkedin could make the perfect suitor.

Whatever happens, the talent technology landscape is sure to shift in the next year or two. I feel the earth rumbling beneath my feet. Only time will tell whats left when the dust settles.